I've coded this software for the mighty Universal 6502 RAM and ROM expansion. This usefull expansion was developed by Nicolas Welte. It uses a 128Kb Amtel-Flash and 32Kb S-RAM for different 6502 based computers and peripherals. The Flash is banked into 4 ROM-Sets including the later PET Option-ROMs. The configurable S-RAM replaces (in use) the existing memory.
So it's a very powerful tool for trouble-shooting or testing own software. 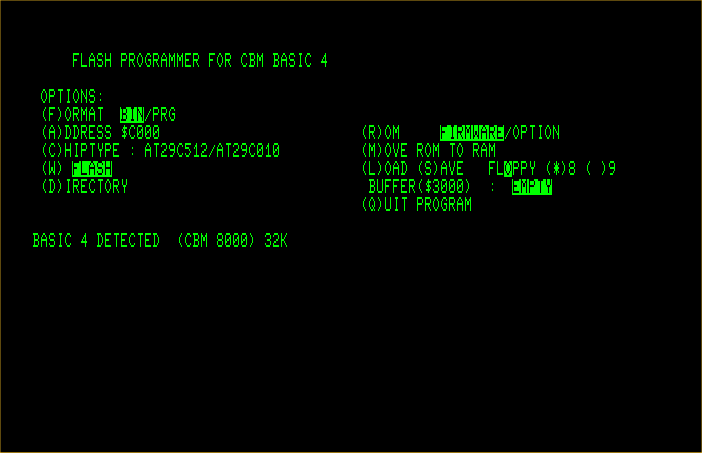 (F)ormat BIN/PRG
Choose binary file or prg. In the second case the load-address will be skipped.

(C)hiptype
Not in use yet.

(W) Flash
Writes the buffer to the banked Flash.

(M)ove ROM to RAM
Copies your choosen area to the buffer.

(L)oad (S)ave
Loads and saves the buffer {choosen drive}. There is no error-handling. If the routine kills the program, a restart will bring it up again.

The software uses auto-detection of RAM-size and used ROMs. This is for your information and later development. One day we'll have a program for all CBM-machines.
The software is still under construction. The final version will be distributed with documented source under GPL-License.

* Floppy-detect
* Support for some more Amtel-Flashs.
* All in one-version for all CBMs with autodetection of RAM and known ROMs